It’s history and journey to the Tower of London by Hermien JD, music composer.

Richard the Lionheart by Plamen Kapitanski 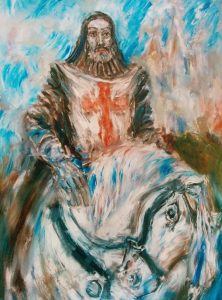 Throughout my career as a musician/composer I’m extremely fortunate to occasionally meet, and work alongside many interesting people … Around twelve years ago, I was specializing in historically influenced styles of music, which mainly at that time was European medieval. A major part of my research included a general history of Richard the Lionheart’s Third Crusade. As a result of this, I was involved on an artistic level with Great Britain’s famous historical palace and fortress „The Tower of London“. I had, around that time released a concept album titled „1189, Lionheart: The Third Crusade“, which featured narration by the Towers Chief Yeoman Warder, Tom Sharp. I had also been asked by travel and history company Camelot International’s James Knight, if I would participate in building an in depth Tower of London web site. Obviously, this could not be done without the official backing of the Tower itself, so after several meetings with the Body of Yeoman Warders, plus the Tower Governor, and other members of the Royal Palace Agency’s hierarchy, we were given the go ahead.

Approximately one year in the making the web site almost immediately became the number one Tower of London site, even overshadowing the Towers very own, but extremely bland official web site. The links to Camelot International’s The Tower of London website are…….www.tower-of-london.com… www.camelotintl.com

One evening while at a function in the Bulgarian Embassy, I was introduced by my friend, singer Milena Slavova to several of her Bulgarian friends. Among them was artist Plamen Kapitanski, who invited me to an exhibition of his works to be held at the Bulgarian Embassy during the following weeks. Of course, I accepted his invitation and was very impressed by his paintings, plus the exhibition was a big success.

Due to my involvement with the Tower of London, I was spending most of my days and evenings there, in particular the Yeoman Warders Club, which was not available to the public. This was a great social club exclusively for and within the Tower, which would be regularly visited by a variety of high profile people ranging from the likes of members of England’s Royal Family to singing stars David Bowie and Mick Jagger of The Rolling Stones, to movie icons such as Tom Cruise and American novel author Tom Clancy, who was actually made an honorary Yeoman Warder.

Along with an array of other Bulgarian friends, including Milena, and Ambassador Valentin Dobrev, I invited Plamen to spend a day including the evening at the Tower.

During, his first introduction to the Tower, especially to the Yeoman Warders, plus finding out more details of my music for the Tower, and my concept album „1189, Lionheart: TheThird Crusade“ Plamen realized there was an opportunity not to be missed. The Yeoman Warders Club, is home to many priceless artifacts from history, plus gifts from heads of state and other prominent luminaries. I suggested to Plamen, that he should consider offering a painting as a gift for The Tower.

As we had already spoken about King Richard and listened to my crusader album „1189, Lionheart: The Third Crusade“ plus the fact that Lionheart was king of England during 1189 to 1199 when the Tower had already been built in part by William the Conquerer less than a hundred years earlier, it became obvious that the subject for the painting should be non other than Richard the Lionheart. What I did not know at the time, was the fact that Plamen would base the painting partially on me „Hermien JD“ due to my own historical background and the influences I seemed to have within the Tower.The Body of Yeoman Warders, or Beefeaters as they are more commonly known are a very closed society. Not many outsiders are privileged to gain access and friendship, let alone acceptance to the social side of The Tower of London. I feel honored in the fact that I managed to gain their trust, especially considering our differing backgrounds. Me a musician, with musical roots in heavy metal and all things Rock n Roll, and the Tower of London with its Royal history, and the Beefeaters with their military upbringing.

I spoke with my friend Chief Yeoman Warder Tom Sharp about Plamen creating a painting, especially for the Tower, and donating it as a gift, to hopefully be placed on view privately within the confines of the Yeoman Warders Club itself. The reason I suggested the painting for private view rather than public view was, I felt it would add more value and prestige at being part of the Towers private collection. I have since been proved right.

Within a month of the initial idea, Plamen had completed the painting of his interpretation of King Richard the Lionheart. As told by Plamen himself, he used my album „1189“ as part influence, listening to the album with its music and narration, while painting. Not long after finishing the painting Plamen contacted me, I set a date for us to go socially to the Tower. The club was extremely full on the particular evening we went, with many guests and families of the Yeoman Warders. When Plamen presented the large package to Yeoman Chief Tom Sharp, a crowd of other Yeoman gathered round. Everybody was extremely impressed. The only ruling I was given by Tom Sharp when I originally told him about Plamen wanting to donate a painting, was that for it to be accepted for display, it would have to fit the style and atmosphere of the Tower itself… After opening the wrapping and having a first glimpse of what Plamen had done, any doubt as to whether it would fit was gone. Upon seeing the painting everyone was extremely impressed and enthusiastic and immediately started talking about where would be the best place for viewing.
The many times I visited the Tower, before I relocated to Tokyo, Japan, Plamen’s painting had been placed at various different locations within the Yeoman Warders Club. At that time, every few months, all displays in and around the club were changed to different areas so everything got seen, by all who visited.

One thing is for sure. Plamen Kapitanski’s painting „Richard the Lionheart“ will remain on display inside, and as part of the most famous palace and fortress in the world,“The Tower of London“ home to Englands Royal Crown Jewels, for as long as the courtyard Ravens remain, and as long as the Tower is standing.

Who is Hermien JD? 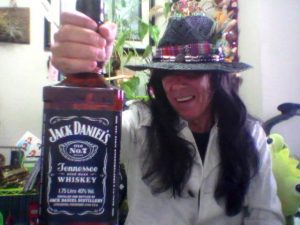 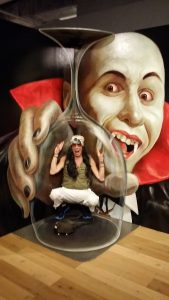 Now, as a multi-layer recording artist, composer and Sound Designer he has written cinematic style soundtracks for history society’s and heritage sites throughout Europe & the UK